Rising temperatures from climate change pose a threat to military personnel, both at home and abroad. There have been a total of 11,452 heat injury incidents reported U.S. Armed Forces Military bases from 2014-2018. And since 2008, according to the Pentagon, at least 17 troops have died due to of heat exposure during training exercises… Read more » 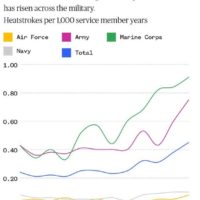